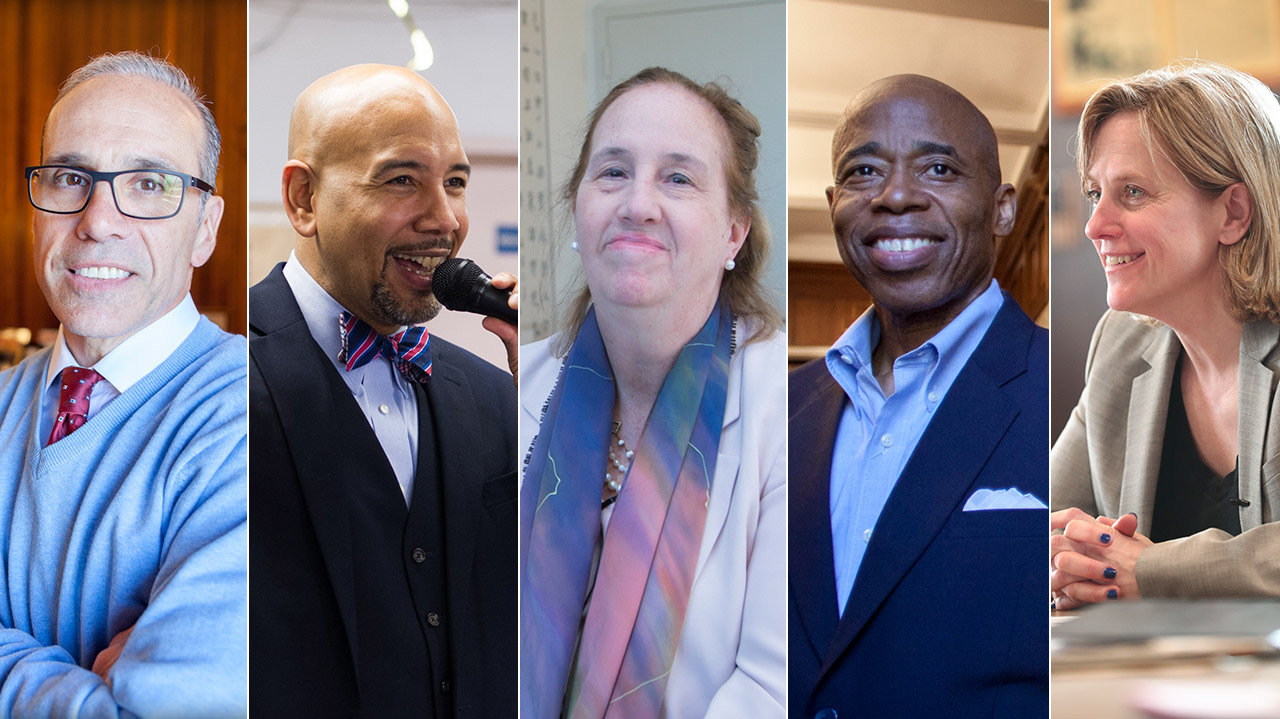 Millions of dollars in city funding is controlled by five borough presidents, who can allocate it to the projects of their choosing — like affordable housing complexes in the Bronx, a rehabilitation center on Staten Island or upgrades to a police precinct in Queens.

While the role of a borough president can seem ceremonial at times, these are the only politicians whose sole purpose is to advocate for a whole borough.

“The borough-wide perspective is an important one, and we work with the legislators in order to deliver that perspective,” Queens Borough President Melinda Katz says.

The borough presidents use that perspective to advise on issues like land use and the city budget. Their primary role isn’t to pass legislation, Katz notes, although they can sponsor legislation if they partner with a member of City Council. But in order to achieve their agendas, they must work with city agencies.

The five borough presidents, who are all up for reelection in November, focus on issues that many city politicians speak on, including securing affordable housing and promoting healthy living.

Their days can include anything from mundane meetings to dancing with seniors at a local center. Here’s a snapshot of the lives of each of the borough presidents.

“We’ve been so beaten down psychologically and spiritually.” Credit: Corey Sipkin

Ruben Diaz Jr. “can’t stand” that his son, in his 20s, moved to upper Manhattan when he graduated college, he says with a laugh over lunch at a Bronx pizzeria.

He wants young people, like his son, to stay in the Bronx, but that hasn’t always been the mindset. When the borough president grew up in the Bronx, the mindset was to get an education and get a job so you could “get the hell out.” Now, as the borough sees more and more development, there’s more reason to stay, he says.

In order for that “skilled, young workforce” to remain, however, there needs to be affordability — and not only for the lowest incomes, Diaz, who has been borough president since 2009, says. Affordable housing needs to have a mix of availability for low-income and middle-income.

“If you don’t have that balance, then you’re really not setting our professionals up for a place to stay here.”

Hear more from Diaz by clicking on the video above.

“Staten Islanders have an elevated expectation of their elected officials.” Credit: Yeong-Ung Yang

“I am hyper by nature. I like to bounce around the building,” Borough President James Oddo says as he tosses a rubber ball between his hands at his desk at Staten Island’s Borough Hall in St. George.

That energy also translates to his job, which he said is “to fight for Staten Island every day, all day,” and many days it is a fight – with city agencies.

“I’ve told the mayor in chapter and verse, in Technicolor language, about just how frustrating it is to deal with agencies like DDC [Department of Design and Construction], and at times DOT [Department of Transportation].”

Oddo, who was a council member for 15 years before becoming borough president in 2014, works with city agencies on quality of life issues like getting roads paved, which he says has been a long battle.

“For 15 years, we essentially underinvested in our roads in terms of resurfacing, and four years ago, just about any community in Staten Island, just about every other block was crumbling,” but in the last three years, more roads have been paved than ever before, Oddo says.

Hear more from Oddo by clicking on the video above.

“People, right now, are trying to figure out all over the world how to bring their kids and their parents to the borough of Queens.” Credit: Raychel Brightman

When Melinda Katz introduced her then-6-year-old son to an assemblyman, young Carter was confused because he wasn’t a woman.

“Men can be elected officials, too,” she recalls telling him, adding that he “learned that on that day.” “From my son’s perspective, women are very strong,” she says.

Katz, a single mom raising her two sons in her own childhood home in Forest Hills, served in City Council between 2002 and 2009 and became borough president in 2013. She often refers to Queens as the “borough of growth” or the “borough of families.”

“We have folks coming in from all over to bring up their kids here.”

But there are challenges that come with that growth, including a need for more jobs in the borough. “The economy is the key factor in moving forward here,” Katz says. “The creation of jobs as we grow is going to be the pivotal thing.”

Hear more from Katz by clicking on the video above.

Eric Adams is incredibly proud of his transformation after being diagnosed with Type 2 diabetes in 2016.

“I want to be a living example of how wellness matters, how you can reverse your condition by living a healthier lifestyle and making smarter choices,” he says in his Downtown Brooklyn office, which features a cooking station, exercise equipment and a standing desk. By becoming vegan and exercising every day, Adams, who took office in 2014, says he was able to reverse his diagnosis.

As borough president, he wants to give residents of Brooklyn – the second unhealthiest borough according to the 2017 County Health Rankings – the tools to “take power over their health.”

One way he does this is by investing in greenhouses, especially at NYCHA properties, “where you have some of the worst eating habits and access to healthy food,” and at schools, where healthy habits can be taught to children who can then teach their parents, he says.

Hear more from Adams by clicking on the video above.

“The biggest challenge in Manhattan is the affordability crisis.” Credit: Yeong-Ung Yang

Even Gale Brewer can’t overcome Manhattan’s transit problems. “The traffic is an issue. Sometimes the subway’s faster, but not always,” she said, after deciding she won’t be able to make an event before a 2 p.m. meeting at her office near City Hall. “It’s too bad, I was trying to get to it.”

The borough president craves face-to-face meetings with her constituents, appearing at as many as 12 events, public meetings, rallies or other functions a day.

“You can only do so many things.”

In between events, though, Brewer — a college professor and mom of several foster kids — also tries to mentor younger generations. Her office accepts all intern applicants, who can range from high school students to graduate students, and she’s been known to have as many as 150 interns at one time.

Brewer, who was elected in 2013, said she likes to have as many as possible. “It gives us an excitement of young ideas in the office,” she said. “I love to see them grow.”

Hear more from Brewer by clicking on the video above.